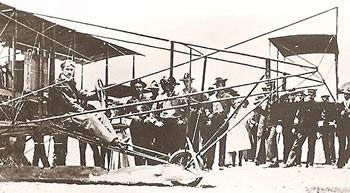 On May 29, 1910, Glenn Curtiss completed a 150-mile public flight along the Hudson from Albany, NY, to Manhattan. Curtiss’s feat – the first true cross-country flight in the United States – was a technological tour de force. Not only was it by far the longest flight yet attempted in the country, but it also meant traveling over unpredictable terrain with virtually unknown wind and weather hazards – quite a different matter from the fair-weather demonstration laps around airfields that characterized most of his previous flights. Hundreds of thousands of people showed up to watch Curtiss’s flight down the Hudson, and the New York Times devoted no less than six full pages of text and photos to the occasion – the most space the newspaper had ever allotted to a single news event.

This historic flight, more than any other, launched the United States into the age of modern flight, clearing the path for the development of airmail and modern air travel, as well as the terrible prospect of air power in war.

Near dawn on May 29, in a field on Rensselaer Island on the outskirts of Albany, NY, Curtiss donned his flying outfit in a makeshift tent. When he stepped out, he was in a pair of fisherman’s rubberized waders that came up to his armpits, a cork life jacket, a snug-fitting cap and a pair of goggles. The waders, Curtiss explained, were not intended so much for the prospect of a water landing as to provide warmth. After all, despite the clear spring day, Curtiss would be flying in the open, several hundred feet in the air, at a speed of over 50 miles per hour.

Even at this early hour, nearly a hundred spectators had assembled at the edge of the field. With virtually no fanfare, Curtiss climbed into the pilot’s seat of the aeroplane he had designed and built. A fabric-covered biplane “pusher”, it had a large wooden propeller mounted behind a dual set of wings. Because Curtiss would make the entire flight over the Hudson River, he mounted airtight metal pontoons beneath each wing and, from cloth used for hot-air balloons, he fashioned a large elongated bag, filled with champagne corks and attached it to the undercarriage. The plane could not take off from water, but as he and his friend and assistant Henry Kleckler proved in earlier tests, it could easily survive a water landing.

The plane took off at 7:00 AM. In Curtiss’s own detailed, minute-by-minute account, he describes rising smoothly from the Albany field and flying straight above the middle of the river. With the Hudson spread out below him like a wide, glimmering road, he noticed with fascination that he could see through the clear water to deep beneath the river’s surface. Finally airborne on such a beautiful, cloudless day, “I felt an immense sense of relief”, Curtiss writes. “The motor sounded like music”. He set down within the city limits of Manhattan in just over two and a half hours of flying time, having covered 150 miles and averaging about 54 miles per hour.